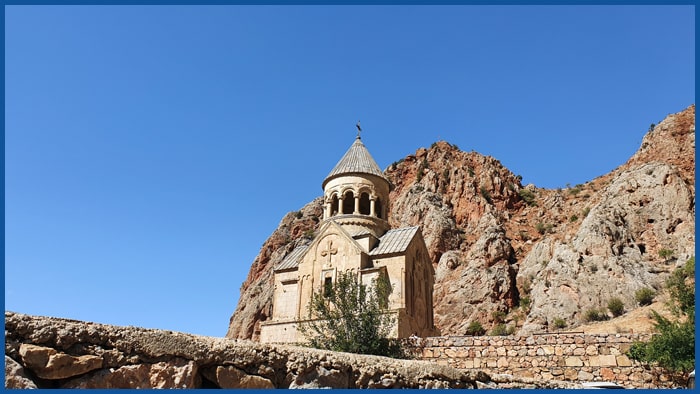 Day 1: Yerevan
Dearest guests, we are happy to see meet you in the airport and take to the city. There is going to be the time spent by making a register in the hotel, with further city tour along Yerevan. Today it is seen as the capital of Armenia. Yerevan is one of the largest cities of the country. It is also seen as the scientific and ethic center. Being in the tour here wanderers are also able to find out that they are staying at the altitude of 900-1300m above sea level. At the same time, it is peculiar for being in the north-east of Ararat plain. Basically this plain is bounded by the Caucasus Mountains. The history of the city is taken from the ancient times, almost from the 8th century. In the evening our guests have a chance of hearing the music while having dinner in the national restaurant. Night is offered in the hotel.

Day 2: Yerevan - Echmiadzin - Yerevan
As our trip is organized in this country, we are going to start the sightseeing investigation, going along the capital. And the first place we would like to visit is the viewing deck of Victory Park. further it is taken by the open museum Cascade. It is unique and shows modern art. Going next, we are seeing the Opera and Ballet Theater and the Sergei Parajanov Museum. Today it is also possible to wander about Echmiadzin city. It is the spiritual center of the native people, even the ones who live in other countries. Here the Church of St. Hripsime, created in the 7th century and the Mother See Cathedral of St. Echmiadzin should be visited. Coming back, guests have lunch at Machanents Creative Center. Further guests of the country have a chance to be aware with the Kochar - Sasuntsi David works. This is the famous and well-qualified sculptor. Invitees immerse in history seeing carpet of "Megerian Carpet" factory museum. Carpets taken there serve to be extremely ancient, of about 400 years. There are special people here, craftsmen and they can help in the process of creation of a carpet, if guests have a desire. Evening is spent with the walking long Northern Avenue, paying attention to Republic Square singing fountains. Night is planned in the hotel.

Day 3: Yerevan - Goris
Today guests have a need to leave the hotel and take a way along the Ararat valley. With it we reach the Khor Virap monastery. The history of this monastery is connected with the process of the native people to adopt Christianity in Armenia. This happened in the 4th century. From this place, it is great to see the views of the Mount Ararat. It is described by the Khor Virap being located extremely near the mount. Further the stop is made at Areni village. Today the way is made along the Vayots Dzor region. It is peculiar, but this site is known for being winemaking center of the country. Today it is possible to say that about 600 years ago, the process of wine creation was recognized here. It can be proved by the evidences of Areni village cave. One of the most striking and astonishing finds was taken in September 2008, in the cave. Later the way is made to the Noravank monastery. And it serves to emerge in the 13th century. The monastery is located between the red rocks of the gorge. Then guests have lunch and after the rest the way is made to the Goris location. Guests will be fascinated with the surrounding for sure. Night is spent in the hotel.

Day 4: Goris - Yeghegis
Starting the day with breakfast guests are going to make a tour along the wonderful location Zorats Karer (Karahunj). Today it is the site, serving the ancient archaeological meaning. At the same time it is the megalithic assembly of past times. It can be reached with the way to 1770m above sea level. Rows of red-brown monoliths, rather huge are going to be seen today. In the 6th millennium BC, Karahunj meant the site of observatory built. There are holes here, and we would like the guests to pay attention to the stela. These are the writings on special walls, telling us the stars of the sky, happening 7.5 thousand years ago. Later the route is taken to Tatev. It is literally the pearl of medieval architecture of the country. Being the guest of this location guests are able to have a ride of the longest cable car. This cable car is laid along Vorotan gorge. The deep is about 320m. Lunch and rest is taken of course and in Yeghegis night is spent.

Day 5: Yeghegis - Sevan lake - Dilijan
Today our group goes to the Selim Pass. It is found at the height of 2500m, being an extremely amazing location of the surrounding. Here we pay attention to Lake Sevan. Guests should be aware of this lake being the blue treasure of Armenia. Guests are going to wander along the largest mount, where lake of fresh water is found. And it is seen as the only one all over the world. Such a lake is found at the altitude of 1900. Invitees have a chance to see the Ayrivank and Noradus Monasteries, try local cheese, wine and cognac. Later guests have rest, with further master class in Tsaghkunk given by acknowledged Chef. One of the locations, better to be acquainted with, is the Sevanavank Monastery. It emerged in 874, by the forces of Princess Mariam. It can be found at the peninsula. The stroll here opens us the opportunity to see the famous and so amazing blue lake, located in the heart of mountains. Then the group makes a tour in Dilijan town. This town is known for rich nature presented by many trees, as well and clean and pure air. Having the trip along the center of historical meaning guests are going to immerse in the 19th century. Night is spent in the hotel.

Day 6: Dilijan - Gyumri
We are glad to offer rather delicious coffee and breakfast, with then going to Lori region. Today we would like to wander along ancient Sanahin and Haghpat monasteries. They are medieval and presented in the UNESCO World Heritage List. Invitees are always interested in history, that is why they are told of these monasteries being main centers for education, at the same time surrounded by dark forests, stone canyons of the Debed River and of course the views of small villages. For the rest, lunch is offered in Kefoe restaurant. This restaurant is known for being the right and extremely significant place of serving local recipes. Later the trip is made to the cultural center of the country, being the second greatest one in the country. Local traditions can be seen in the museum, with then witnessing historical and of course cultural center. Here non-locals are interested with five churches, monasteries we have mentioned and an Orthodox chapel. The Amenaprkich Church or Church of the Savior is seen as one of the most picturesque ones, also valued in historical meaning. After dinner in the Gvug gastro-yard, night is spent in the hotel.

Day 7: Gyumri - Yerevan
Today the walk is made along the Gyumri, then to Sev Berd, the Museum of Crafts and Frunzik Mkrtchyan. We are glad to offer lunch in Cherkezi Dzor restaurant. Later boarders make a way to Yerevan passing the Mount Aragats and the Saghmosavank Monastery (Psalm Monastery). The latter is located at the gorge of the Kasakh River. Making the journey here, wanderers will make a stop at the monument of letters of the Armenian alphabet. This is the monument opened in 2005. It was created in honor of the 1600th anniversary, when alphabet was found. Being here fantastic views of canyon are seen. In Yerevan night is spent in the hotel.

Day 8: Yerevan - Garni - Yerevan
Azat River is the location of today, and it is presented by remarkable canyon. Today guests see the stone monastery of Geghard, emerged in the 13th century. It is also included in a UNESCO World Heritage Site. The complex and just the monastery are identified as the unique ones, as being made of rock, as well as carved in stones as well. The route is then taken to the Garni village, created in 77 AD. This location is famous for the Symphony of Stones. We also want to pay attention to the paganism sanctuary of Hellenistic style. It is the only saved temple of the country today. The native resident's house is taken for having traditional lunch. When we find ourselves back in Yerevan, the route is made to the Yerevan Brandy Factory and ARARAT Museum. With this visiting we are going to see the art of craftsmanship, and open the culture of brandy business of the country. Night is offered in the hotel.