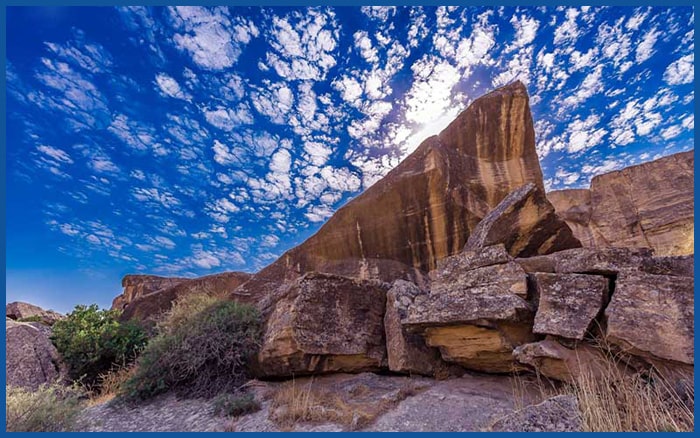 Day 1: Baku
Alluring principal city of the Caspian Sea is going to be visited after the arrival to the airport of Baku. After a long flight guests have rest in the hotel and then start the investigation of the city, its peculiar locations, along with visiting of old and modern parts of the country. There is going to be lunch and after that the excursion along the center of the city is going to be seen. Here we make a witness of the Heydar Aliyev Cultural Center, created by the architect designer Zaha Hadid. The view of the building shows us the lines of unusual views, showing the sites for exhibitions to be made. At the same time these buildings create the meaning of culture of Azerbaijan, those who love modern and olden architecture in the only place. At the same time the center of Aliyev is seen as the most greenery one. Night is offered in the hotel.

Day 2: Baku
Today the trip is started from the tour along the old part of the city. So here comes the view of housing area Icheri Sheher. It is located in the very center of Baku, famous for being bounded by the walls of the fort. Here in the old city we are going to see such places as Market Square, Juma Mosque, Synyk Gala Castle, Caravanserais, baths, Maiden Tower of the XII century, residential buildings and the Palace of Shirvan Shakhov of the XV century. Here are the monuments identified to be extremely historical ones. Later on, the Workshop of the artist Ali Shamsi is maken the visit to. According to the notes of the local people, there are many other peculiar places in Baku, with many of them being enlisted in the UNESCO historical heritage. Having had lunch, guests have a walk along the territory of the capital in darkness, as the view of night town, in the connection with old streets make people interested in the whole country. Night is presented in the hotel.

Day 3: Baku - Gobustan - Baku
Today the trip starts in the morning with the route to the Bibi-Heybat complex. Also we would like to take guests to the mosque with the grave of Ukeima khanum. This person is said to be the successor of the famous Prophet Muhammad. Going on, you visit the Gobustan Reserve of rock carvings. Excursion here is made with an aim to show about 6,000 rocks in one place. These stones are said to stay here for about 30,000 years old. We drive 10km from Gobustan and turn out to be at Absheron volcanoes. Having investigated this place, guests have lunch and rest, for then start excursion along Carpet Museum. This museum contains many peculiar collections of about 10,000 items. Items are presented with ceramics, metal and bronze jewelry, metal, all of the 14th century. At the same time here we can notice 17th-20th centuries carpets. Night is spent in the hotel.

Day 4: Baku - Lankaran (Girkansky reserve) - Baku
Start you day with the route to the Hirkan Nature Reserve, as it is seen in the Representative List of the Intangible Cultural Heritage of UNESCO. Today this monument is presented by natural views, forests and the changing zone from tropical to dry subtropics. Guests will have a chance to have a high regard for boxwood, ironwood, velvet maple, giant figs, silk acacia and vines. At the same time there are about 1900 kinds of plants here. Out of this amount, about 160 species are found in the Talysh mountains. Fauna is also rich here, presenting us leopard, the Caucasian lynx, the stone marten, the porcupine, the Talysh spotted woodpecker, the Iranian robin, the Persian snake. Admiring folklore and viewing dance of ensemble Nyanyalar (Grandmothers), but for additional price, guests have lunch in the restaurant. Night is presented in the hotel of Baku.

Day 5: Baku - Shemakha - Gabala - Sheki
From Baku the group drives to Shamakha, famous for the vertical wall of Sheikh Diri Baba's rock-cut mausoleum. It is located in Maraza village of Azerbaijan. Here architecture makes us remember about the views of geometric shapes and spirituality. Being at this territory guests are going to visit the Juma Mosque. Then the way is made to Gabala, famous for Albanian church located in the Nij village. It is also known for the Udins living there. And these are 26 tribes of Albanian people, creating the Albanian state, emerging in III century BC - VII century AD. In the end of the day we start for the Aspi Winery, where we have lunch and taste wine. Listening to national music Mugam, arranging various types of music of the country, guests have dinner in the restaurant, after being taken to Sheki. Night is offered in the hotel.

Day 6: Sheki - Baku
Today the tour is made to Sheki, as it presents us fantastic locations of Azerbaijan. It is found at the height of 700 m above sea level, in the heart of mountains and astonishing oak forests. Being here guests visit the Shebeke workshop where they are able to feel the lessons of cooking Sheki Halva. For the next destination we are going to witness Caucasian village of Kish. Stone buildings and paved streets of the village present us the view of the resident khanate. Having lunch we take a tour to Sheki Ipek Silk Mill. The entire country is proud for kelagai. This is traditional silk headscarf for women. It is seen to be in the Representative List of the Intangible Cultural Heritage of UNESCO. Night is offered in the hotel.

Day 7: Baku - Absheron Peninsula - Baku
Today we are going to show the view of the Historical and Archaeological Museum. For this we wander about Gala village, being the oldest village of the Bronze Age. About the 5th century, there were created fortress and the open museum. The trip is then made to Ateshgah Temple of Fire Worshipers. This is seen to be the endless flame. Having lunch we get to Yanardag, also known as the Burning Mountain. The local green bazaar is visited after lunch, in Baku already. Night is spent in the hotel.

Day 8: Baku - Airport
In the hotel guests have breakfast and then start for the airport.