When taking a tour to Kyrgyzstan and rent a car, don't overlook the country's food, which is mostly centered on the nomadic people's traditions. The food is influenced by the practices of Turks, Persians, Arabs, Indians, Chinese, Russians, and Europeans. There are also several eateries that may be visited while renting a car in Kyrgyzstan. We've selected to highlight certain key aspects of the country's cuisine in this post, and here they are:

Bread
Bread, in fact, has a tremendous deal of importance, and people revere it. The nomadic people prefer to rip it rather than cut it. What's more, the bread should be placed with the upper side up, not upside down. Lepeshka, a circular bread baked in a tandoor, and boorsok, or tiny pieces of bread fried in oil, are the most renowned types of bread. It denotes the Kyrgyz people's wealth.

Beshbarmak
This is a dish that has been reported to be popular among nomadic people since ancient times. It is necessary to wash hands and recite the blessings after such a meal. Hands are used to consume it. When Kyrgyz eat beshbarmak, people sit close together and talk about a variety of things. This is the mutton-and-onion-and-dough-based dish.

Chuchuk
Delicacies are meals that people like eating, and chuchuk is a set of products prepared for special occasions such as holidays and tois. Ingredients such as kazy kabyrga (ribs), salt, paprika, black pepper, onion, garlic, cumin, and bay leaf are required to prepare the chuchuk. During the marinating of the meat, a variety of species are employed.

Kuurdak
The next well-known dish is kuurdak, which is made with roasted meat or lamb, potatoes, and onions. When the nomadic nomads cooked it on the metal, it was a common meal. The food begins to take on a distinct flavor as a result of the stones.

Shorpo
Shorpo is a meat-based soup with herbs and veggies. It is mostly prepared in the East. When guests eat it throughout their tour, they generally add extra red pepper to make the flavor more distinct. As a result, all of the components begin to develop a memorable flavor.

Plov
Plov is a popular meal that is prepared by people from all over the world. In Asian countries, as well as in several other countries. All major ceremonies, including as weddings, funerals, and the birth of a child, are associated with the preparation of plov. In addition, housewives are known to prepare it for special occasions such as visitor visits.

Samsa
Guests of the country who rent a car in Kyrgyzstan adventure are free to sample samsa, a unique pie prepared with meat, onions, and, of course, species. Actually, it is prepared in a tandoor or on specific stones. At the same time, it may be prepared using chicken.

Manty
Manty is a traditional Kyrgyz meal that is eaten with hands and is a typical dish in each home. The large dish is placed in the center of the table so that all of the guests can put as much as they like in it. Manty are composed of dough and meat and cooked in a large steam-cooking machine.

Lagman
Lagman is a Central Asian traditional dish consisting of lamb, veggies, and noodles. When the dough is produced in the rolls of the noodles, the later one can be bought and cooked on its own. This dish may be prepared with a larger amount of water, resulting in a soup. Peppers, eggplant, beans, radishes, onions, carrots, and other unusual species are examples.

Ashlyam - Fu
Ashlyam - Fu is a dish that is regarded as some of Karakol's greatest culinary. And now, we invite you to rent a car in Kyrgyzstan and sample authentic Kyrgyz cuisine on tours. It's served chilled, and it's ideal for a hot summer day. Noodles, starch, sauce, and veggies are the main components. Essentially, the dish is claimed to be of Dungan Muslim heritage.

Shashlyk
Shashlyk is a type of kebab in which the meat is grilled over an open flame. For the time being, it may be ordered at any restaurants and cafés. The name comes from the meal's origins, which are rooted in Turkic culture. It is now stated to be cooked with marinated meat, species, and sauces, as well as a small amount of veggies.

Dymlyama
Because there is a large area where many ingredients may be combined, the lazy manner of making dymlyama is noteworthy. All of the ingredients, such as lamb meat, onions, potatoes, tomatoes, bell peppers, and so on, are added to the pot without being stirred.

Ganfan
When people think of lagman, they think of ganfan, which is an Eastern meal. We must prepare with a large quantity of veggies, spices, and noodles, but with less water. Rice is used to make noodle soups. Today, it is the dish that is regarded to be the centerpiece of each family's dinner.

Borsch
Borsch will be Slavic in origin and Russian in origin. Because of the country's excellent connections with Russia, it is also well-known in this country. This meal is prepared by some Kyrgyz households. However, it is most commonly requested at restaurants. There are meat and vegetable components here, and the soup's red hue is striking.

Cutlets
It is widely known that our country is a country of different nations, with a diverse population with diverse traditions and customs. As a result, there are many great cuisines available here. Côtelette, for example, is a dish consisting largely of meat ribs that originated in French cuisine. Meat from many animals, such as chicken, turkey, and cattle, can be used. Also included are potatoes and onion.

Kurut
Kurut is a unique food made of domestic production. The snack in this case is milk and its preservatives. They're formed in the shape of balls, and they're salty, creamy, occasionally sweet or sour, and even spicy. Kurut is the table's ornamentation. This dish is popular among both travelers and visitors.

Mampar
Mampar, a Central Asian soup composed of cooked flatbread, onions, and potatoes, is a popular dish. Occasionally, onions and species are added. This dish is simple to prepare and may be used to adorn any table.

Pelmeni
The Kyrgyz people were strongly affected by Slavic people, and the pelmeni began to be adored by the Kyrgyz. This is a boiled dish in which the meat is wrapped in dough and cooked in salty water. It is then served with sour cream, ketchup, and mayonnaise. Very tasty! Try it on tours in Kyrgyzstan. 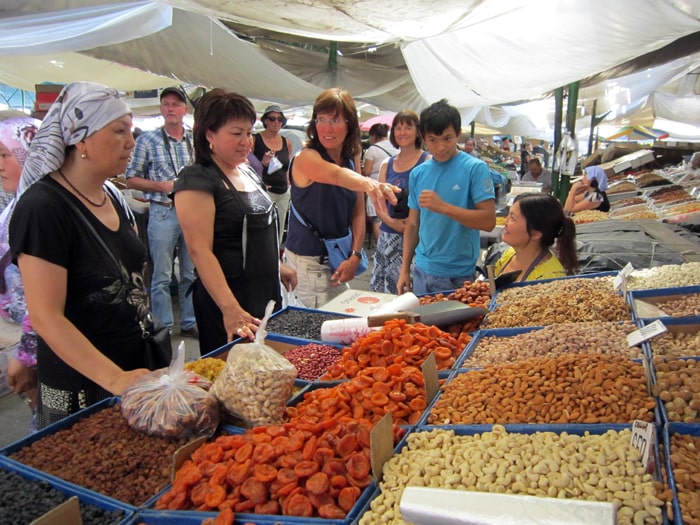