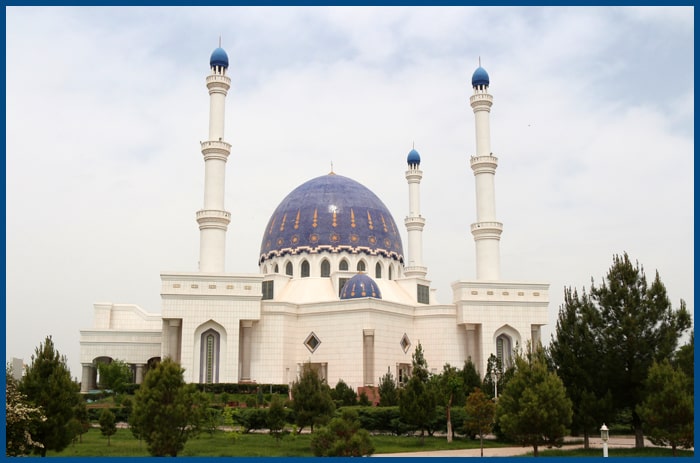 Short summary:
Welcome to Turkmenistan, a country of rich tourist destinations in Central Asia. On this tour you will have the opportunity to enjoy the natural beauties and countless ancient monuments. Have a pleasant time!

Day 1: Ashgabat
We are glad to see you having Blaze trip to wonders! The local guide will meet you at the international airport and transfer you to the hotel. Later on, you will see the night view of marble Ashgabat city. Rest is in a hotel.

Day 2: Ashgabat - Mary/Merv
The tour will start by travelling to the Mary province and visit Merv (UNESCO World Heritage Site). It is one of the most places among tours. Merv played an important role at the period of the Silk Road for 2 000 years. Seeing the Mausoleums of the Sultan Sanjar and Muhammad Ibn Zayd of XII century, you will be impressed by how the history saved them and brought up today. The tour will be continued to the National History and Ethnology Museum. Night is in a hotel.

Day 3: Mary - Ashgabat
We are glad to present the next day of travelling to Ashgabat city. On the way you will visit the ancient Nedir Kala belonging to the 18th century and built by Nadir-Shah. In the afternoon, we will drive to "Old Nisa", which in past times was the capital of Parthian Empire of 600 years and was the enemy of Rome Empire. Nowadays it is the Sanctuary of Parthian Kings as well as included in the UNESCO Heritage List. The next destination of our tour will be held in the Ertugrul Mosque. It is one of striking Muslim mosques of Turkmenistan, was built in the period of independence. The mosque can accommodate up to 5000 people. Its style made in Turkish and was named after Ozuzhan Ertogrul - Osman I, the father of the first leader of the Osman Empire. Overnight is in a hotel.

Day 4: Ashgabat - Kow Ata - Nokhur village - Ashgabat
Today we will travel to the Gokdepe village in order to see the Ahalteke horses. You will be shown race on Ahalteke horse and ride. Later on, we will visit Kow Ata, located near Ashgabat. Driving 60 km to the west, you will find the famous Baharden Cave located among the lake Kou-Ata which means"father of the caves". On the way you will be told many facts about it as well as use the healing properties of water. We have no doubt you will be impressed on tours. Afterwards you will have an idea to see Khur Khuri waterfall with a height of 53 m. Transfer to hotel.

Day 5: Ashgabat - Darwaza
Having a hearty breakfast, you will visit the carpet museum and find more than 2000 ancient remains. It has an area of more than 300 m² which made it to be included into the Guinness Book of Records. Afterwards, we will travel to Gas Crater "Darwaza". On arrival, you will be impressed by its flaming view of the 20-meter crater. It is important to note that, tours to the Darwaza Crater are organized in the evening, where you can sit on ground and take pleasure with tasty picnic. Today you will have a cozy night in tents.

Day 6: Darwaza - Ashgabat
After breakfast, we will travel back to Ashgabat. You will arrive in a hotel for rest. Later, we will visit the memorial complex, opened in 2014. Reaching there you will find a rich collection of three memorials dedicated to heroes who died during the 1948 earthquake, in World War II as well as in other Turkmen clashes. The Earthquake Memorial has form of a bronze bull taking a child. Then, free time to explore the rest of the city. Night is in a hotel.

Day 7: Flight
In the morning is transfer to the airport. Blaze trip to wonders is over.

Note: Each Traveler should have 2 photos (5×6) to be presented at the points of entry.