Fairytale tour of the great places 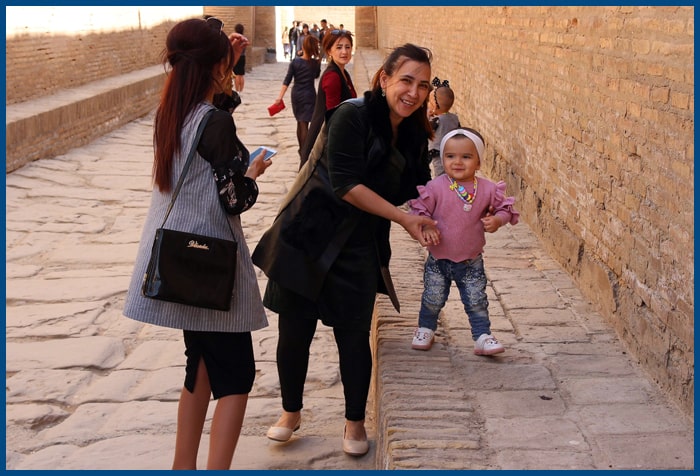 Short summary:
We present to your attention an amazing tour where you can get acquainted with the unimpressively beautiful cities and sights that will not leave you indifferent during the trip.

Day 1: Tashkent
We are happy to see you on Fairytale tour of the great places. On arrival you will be met and have the city tour where you can visit the Independence square, erected as a symbol of victory over fascism in World War II. We will have a walk through the local Broadway located near Independence square and Amir Timur square. On the way you will see famous Tashkent metro opened in 1977. Continue to visit the Chorsu Bazaar, Kukaldash Madrasah and Hast Imam complex where you can admire madrasahs, mosques and mausoleum. Being here, don't miss to visit the Othman Quran. It is the world's oldest Quran copy found in the 8th century. Quran was in the right place to Othman Ibn Affan, the Third Caliph who later killed by non-muslims in 8th century. Transfer to a hotel for rest.

Day 2: Tashkent - Samarkand (350 km, 4 hrs drive)
In the morning you will be transferred to Samarkand. Samarkand is located in the valley of the river Zerafshan and considered to be the second largest city of Uzbekistan. On arrival, you will have the city tour and visit Registan square, Shakhi Zindeh, Mausoleum Guri Emir and Bibi Khanum Mosque. Registan Square has three fascinating Madrasahs found in the 15-17th centuries. Shakhi Zindeh shows a big collection of mausoleums dating back to 11th-15 centuries being a part of a UNESCO World Heritage Site. Bibi Khanum Mosque was built in honor of beloved Tamerlane's wife. Overnight is in a hotel.

Day 3: Samarkand - Urgut - Samarkand
After breakfast, we will drive to a small village outside of Samarkand - Urgut. This village is famous for its noisy and colorful atmosphere. We are sure you will like it on tours. Then we will return to Samarkand and drive to see a memorial complex of Al Bukhary. Al Bukhary was an Islamic professor, who authored the hadith assemblage known as Sahih al Bukhari, observed by Sunni Muslims as one of the most authentic Hadith collections. Night is in a hotel.

Day 4: Samarkand - Gijduvan - Bukhara
Today we will travel to Bukhara. On the way, we will stop over at Gijduvan village and see private pottery workshop where its skills have been passed from generation to generation. Gizhduvan is residence for the sixth generation of potters from Narzullayevs family which overvalued Gijduvan school ceramics for worldwide. Gijduvan School of ceramics is renowned by a geometric pattern like green and blue colors succeed in honor of products.  Afterwards we continue to drive to Bukhara. Overnight is in a hotel.

Day 5: Bukhara
Today you will have the city tour of Bukhara. Visit the ancient citadel in Bukhara found in the 4th century as Citadel Ark. It was the main place for several dynasties of Bukhara Empire. Later on you will see Samanids mausoleum, a real masterwork of architecture of 9th -10th century. Afterwards visit the Chashma Ayub, meaning Job's well and Bolo Hauz mosque and see forty columns built in honor of Bukhara governor Abu Fayud Khan. On the way you will visit souvenir shops as well as see the most famous madrasahs of Bukhara called Nodir Divan Begi of Lyabi House Ensemble. In the end of day, you will visit the Poi Kalon complex and see three structures built in the 12th - 16th centuries: Kalon minaret, Kalon mosque and Mir Arab Madrasah. Night is in a hotel.

Day 6: Bukhara - Khiva (440 km, 7 hours)
We will drive to Khiva and learn more about its history connected with the history of the legendary Khorezmshah's State with its capital in Urgench. In the 10th century Khiva is declared as a foremost trading center on the Silk Road. All the caravans had a stop here with an endless stream of camels with baggage. The way from Bukhara to Khiva will go via the famous Kizilkum desert where you can admire Amu Darya river as the deepest river in Central Asia, formed by the confluence of the Panj and Vakhsh in Tajikistan and flowing into Aral See. Rest is in a hotel.

Day 7: Khiva
In the morning, you will have the city tour in Uzbekistan. You will see the inside of Ichan Qala, the inner city in Khiva with strong walls. On the tour you will see old sound buildings, palaces, mosques, Madrasahs, Mausoleums, Minarets, Caravan-Sarais and Bathhouses malformed Ichan Qala into unique city-monument. Ichan Qala is famous for over 400 traditional dwelling houses and about 60 architectural monuments. In 1969 Ichan Qala was selected a historical and architectural conservation area. Here you will visit the KunyaArk fortress found in the 17th century by Muhammad Arang Khan, Kalta Minor minaret and Tash Khouvli palace, an amazing sample of Khorezm architectural mastership of 1830s. Night is in a hotel.

Day 8: Khiva -Tuprak Qala - Ayaz Qala - Urgench - Tashkent
Today we will drive to the capital of the Republic of Karakalpakstan - Nukus. It is located in the north of Uzbekistan near the Aral Sea, enclosed by three deserts as the Kara Kum, Kyzyl Kum and Ustyurt. Here you will see two famous fortresses as Ayaz Qala and Turpak Qala. Ayaz Qala is an earliest castle of Khorezm dedicated to the warrior-slave Ayaz who was a Turkic folklore hero. Fortress was found in the II century AD. Tuprak Qala or "clay fort", was the majestic city of Khorezmian ruler Artav. Archeologists title that fortress was built in I or II-century AD and engaged until 6th century AD. Near Ayaz Kul Lake you will enjoy picnic as well as camel ride as option. Night is in a hotel.

Day 9: Tashkent - Flight
Transfer to airport. Fairytale tour of the great places is completes. Thank you for your time on tours.

Service does not include:
- Visa
- Full board
- Travel insurance
- English speaking guide
- Entrances to all museums
- Urgench-Tashkent flight - from 80 $
- Train tickets Tashkent - Samarkand - 30 $