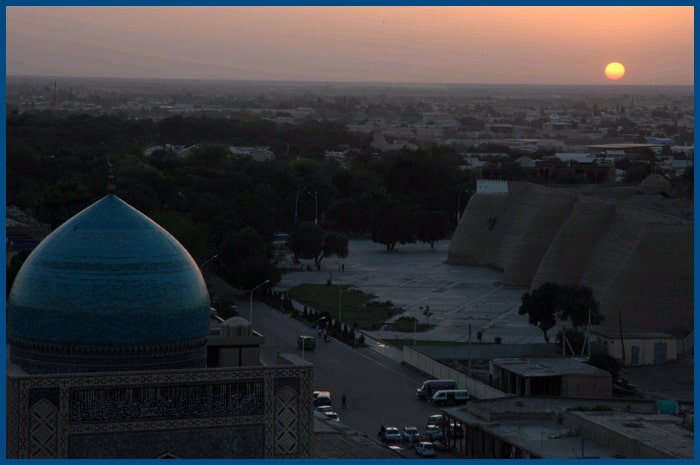 Short summary:
Traveling here will help you to see all the beauty of the ancient world and all its architecture that has survived to this day. In addition to this, you can also enjoy the diverse and interesting nature of Uzbekistan. Explore the country with us. Getting an unforgettable experience both from the service and from the secrets of the Middle Ages.

Day 1: Arrival Tashkent
Guide will meet and accompany you to Tashkent. Upon arrival to the city you will have a city tour that start at the Independence square. In course of the tour you will learn that is the main square of the country that was erected as a symbol of victory over fascism in World War II. Then you will have a walk at the famous Broadway street that as well as Amir Timur square. Then you will explore the one of the most beautiful subways in the world - Tashkent metro, the first line of which opened in 1977. Then you will explore other major sights of the city such as Chorsu Bazaar, Kukaldash Madrasah and Hast Imam which has several madrasahs, mosques and mausoleum. Moreover you will have an opportyunity to  see the world's oldest Quran copy found in the 7th century. Overnight is in hotel.

Day 2: Tashkent - Chimgan - Tashkent
In course of the tour you will be transferred to Chimgan Mountains. To reach the top of the mountain you need to take a ride in a chair lift there you will have an opportunity to see the Beldersay peak. Such lift takes 30 min one-way. On the top you will have a time to relax and observe the pristine and fresh nature. After head back you will have a stop to visit Charvak lakeside beach for entertainment on water activities. But the possibility to play there depends on the season. This lake is manmade and located in Tashkent region. There are a lot of travelers visit this place. In the end of the day you will back to Tashkent. Night is in a hotel.

Day 3: Tashkent - Samarkand (Morning train)
In the morning you will have a ride in train to Samarkand. This is one of the oldest cities with the age similar to Babylon or Rome. Samarkand is located in the valley of the river Zerafshan as well as the second largest city of Uzbekistan. Upon arrival you will have an interesting tour of the major sights like Registan square, Shakhi-Zindeh, Mausoleum Guri Emir and Bibi Khanum Mosque. The first major sight that you will visit is the Registan Square, famous for its three stunning Madrasahs of the 15th-17th centuries. After it the largest collection of mausoleums of the 11th-15th centuries that was listed to UNESCO World Heritage Site is Shakhi-Zindeh. As for Bibi Khanum Mosque, it was in honor of favorite Tamerlane's wife, after his successful arrival from India. Overnight is in hotel.

Day 4: Samarkand - Bukhara
Today you will have tour to Bukhara. During the drive you will have a stop to visit the main highlight of this city - Gijduvan village. This place is popular due to the private pottery workshop of Gijduvan ceramics. In modern days this place became home for the sixth generation of potters from Narzullayevs family. The way of making ceramic is passes from generation to generation. Moreover this family made Gijduvan school ceramics famous all over the world. This school if famed due the geometric pattern s well as green and blue colors which overcome in embellishment of goods. After it you will continue to drive to Bukhara. On the way you will visit memorial complex of Al Bukhary. Al Bukhary was an Islamic scholar, who authored the hadith collection known as Sahih al-Bukhari, observed by Sunni Muslims as one of the most genuine Hadith collections. On arrival to Bukhara the night will be in hotel.

Day 5: Bukhara
The day dedicated to a city tour. Tour will travel around to explore the main sites of the city such as the ancient Citadel Ark of the 4th century. This citadel was used as a palace for several dynasties of Bukhara Empire. Ten is the one of the most beautiful examples architecture of 9th -10th century - Samanids mausoleum. After it you will visit Chashma Ayub - Job's well and Bolo-Hauz mosque. Bolo-Hauz mosque is famous for forty columns built in honor of Bukhara governor Abu-Fayud Khan. You will have time to visit souvenir shops. Then is the place that tourists admire Nodir Divan Begi. This is a part of Lyabi House Ensemble. The tour for today will end with visiting Poi Kalon complex of the 12th - 16th centuries as well as  Kalon minaret, Kalon mosque and Mir Arab Madrasah. Overnight is in the hotel.

Day 6: Bukhara - Tashkent (Evening train or flight)
Toady you will have tour to the sights that locate near Bukhara. Tours to Bahauddin Naqshbandi complex which is a memorial complex of famous Sufi Leader and Philosopher are very interesting and attract people. This place one of the most popular for Muslim pilgrimage of Islamic world. It also should be noted that Sheikh Bakhauddin Nakshbandi was one of the spiritual leaders of Amir Timur. Through the time mosques of Kushbegi and Muzafarohana, courtyard with pool, madrasah, and burial vault of Bukhara rulers and Dakhma upon the tomb of Saint Bakhauddin Nakshbandi survived. Then is visiting the countryside residence that were built for Bukhara Emirs - Sitorai Mohi Hosa complex, which was built while using various architectural styles. This palace was built in honor of Emir's wife who died young "Star - like and moon - like Palace". Then is the sight that is located in Sumiton village - Chor Bakr memorial complex. This place is the town of dead that shows the four sides of the earth that all people are equal. It was built in the period of the Samanids rule until the 16th century. After the pleasant day, you will have a flight (or train transfer) to Tashkent. Your night will be in a hotel.

Day 7: Tashkent - Departure
Breakfast is at the hotel. Transfer to the Airport in the morning.